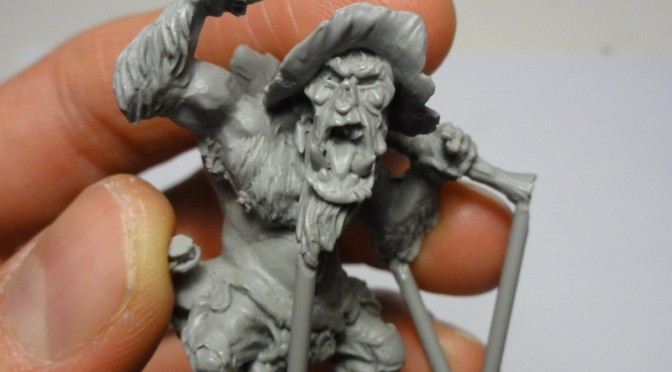 WWarploque Miniatures is a new company and it’s all backed up by one man: Alex Huntley, a multi-talented, 18 year old arts student from the UK. His skill hasn’t gone unnoticed in the industry, he already has some commercial releases under his belt, including one of Maelstrom Games’ epic Banebeasts. Definitely a name to remember!

Warploque Miniatures gets its funding from kickstarter projects. Before sending the sculpts to the caster Alex wants some money in his pocket, which is quite understandable for a young guy like him. Currently there’s a kickstarter project running for his second wave of Swamp Orcs. If you are interested in supporting Warploque Miniatures please check out the Ulule (a Kickstarter variant) page here: http://www.ulule.com/cast-up-the-bayourks/, thanks!

His own line is a mix of monster sized figures: trolls, a dragon and a giant, and some smaller ones: halflings, boglings. Apart from his zombie pirate line there are also some orcs, of which I will be reviewing one today. All of the sculpts are full of character and very unique.

This model’s full name is Jebzakkah B’Ork – Bayourk Chieftain, and it’s one of the bulkier sculpts in the current Orc line. For a fair 10 GBP you get this one-piece resin cast: With Finecast still fresh in our memory it is understandable that some people fear this medium. But rest assured, this is the good variety of the stuff 🙂 The casting has been outsourced to Nottingham-based Black Dragon Castings, a company which I never heard of but they certainly know how to do their thing. A flat tab at the bottom connects to only a few vents which easily snap off the main model. No big deal really. The mold lines on the model itself are a bit hard to find but not very prominent and easy to clean. The resin used is very sturdy, the casting is faultless, no bubbles, gaps, etc.

The sharpness of this cast is probably a bit too good for this sculpt. Where the character and the sculpt is very well done, you will notice that it is created by a sculptor which is only doing this for a few years. The detailing is quite rough and bulky, and some parts, like the pants, really look like a slab of putty put onto the main body and modeled into shape with a sculpting tool.

But at the same time I think this is where the strength of this model lies. There’s no arguing about it: this model is targeted towards gamers, not showcase level painters. The big details make it easy to paint, and if you’re a bit more skillful with the brush you will get nice big surfaces, like the skin, pants, hat, to work on your blending. All in all it’s a very rewarding model to paint. This brings me to another point of criticism: a gamer wants to glue down his model on the base and start painting (or even gaming) right away. But the problem here is that there’s no base supplied with the model. For most painters this isn’t a problem since they probably have a large stock of unused bases. But I can imagine that some people will be surprised to see there’s no base with the miniature (especially those large monster bases). I used a 40mm square Rackham base.

I would like to conclude that there really isn’t any excuse not to buy this figure if you’re looking for an Orc in your army or for your roleplaying game. The sculpting work can be improved (and it will improve over time) but like I already said this isn’t really a problem when you’re looking for an easy to paint model.

This site uses Akismet to reduce spam. Learn how your comment data is processed.