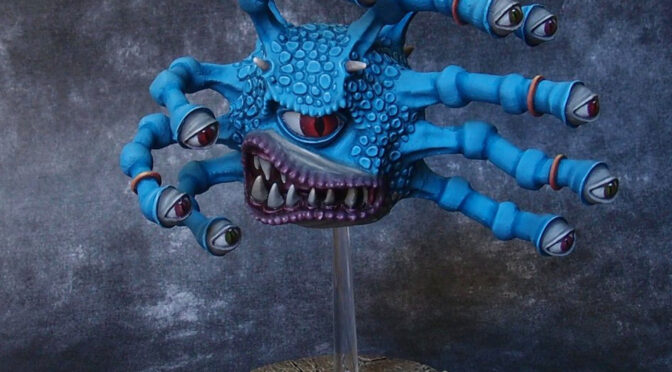 Xanathar – a classical Dungeon & Dragons monster. This resin miniature is made by Gale Force Nine. I like painting such old-school figures. I bet it will be a challenging opponent in many adventure games! 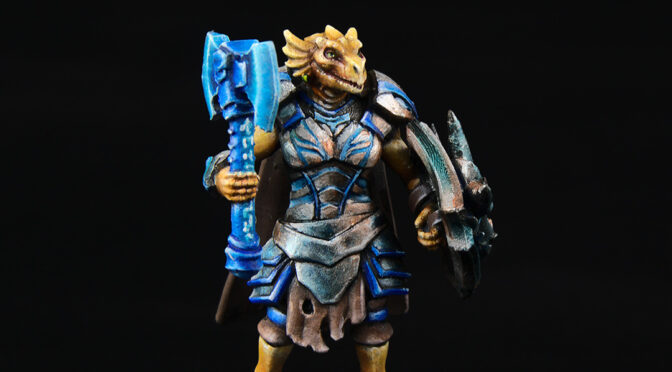 Sometimes you just can’t show something you painted for some time because it needs to remain a secret. Or a surprise. That was the case with this model, Fiori the Dragonborn.

This model was ordered as a gift for another person, so despite having it painted some time ago, we didn’t publish the photos to avoid spoiling the surprise…

But they are here, another fun model created with the Hero Forge creator and printed by us. If you would like us to print and paint something for you, too, just let us know and we’ll respond to your message. 🙂 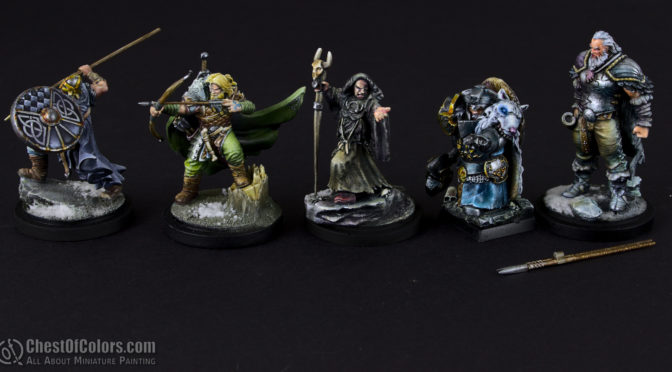 Sometimes you get a project that is just so cool that you can’t let it go. It was the case with these Vikings. Or not quite Vikings, but their fantasy equivalents.

It was a few months ago that we were asked if we could get an unique warband painted. Had it been a typical run-of-the-mill warband, it could have been just another project for us. But these models and the backstory behind them were so uncommon and so special that we decided we simply had to do them! The owner of the miniatures liked Benathai`s style the most and insisted on having him paint the models, and so we did!

The most unique warband

So what was so special about the models? Well, not all of them existed at the moment the project started. Some were still being designed, as the warband included a few models which were sculpted specifically for this project, so there are only single copies of these models in the world!

So here’s the whole warband, and if you want to see the individual models, look a bit further below.

Characters for the viking warband

So here’s the seer. Heavily inspired by the “Vikings” TV show. The representation is pretty accurate, isn’t it?

Now this guy is a bear. A Norse bear though, so he belongs in the warband:

These two, the archer and the spearman, may seem more generic, so why don’t you take a quick look at the freehands which mark them as more individual characters.

This is their warpriest. He wears adamantine armor and is basically shorter than the others, just because that’s the way dwarves are. 😀

Finally the last two models represent the same character, Magnus the Jotunkin brawler, in two different states. One is his usual form while the giant one is what he looks like when he’s going berserk and frenzy transforms him into his giant form.
No, he’s not the Hulk – he’s not green. 😉

Even if you are familar with currently available miniature ranges, you may be unable to recognize the models used for Magnus, because they were made specifically for this warband. Isn’t it great to have such unique pieces to represent your characters?

Have ideas for cool projects?

It’s cool to participate in creation of such personalized projects, which are important to their owners. So if you have any interesting project you would like us to work on, feel free to contact us about it, because we can help you make it happen! 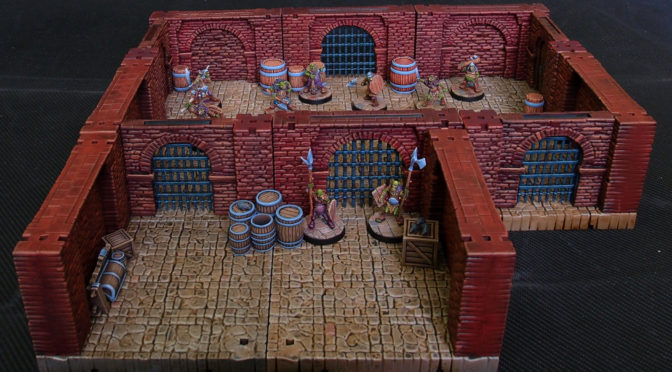 I painted one starter set from Modular Underground Project – 3D Dungeon Wargame Terrain. This plastic terrain is really cool and with some little work you can build unique and realistic looking dungeon. The set contains 10x10cm floor tiles and 6cm high walls. Some walls are solid and some have spaces that can be filled with different inserts – solid walls, doors or steel gates. You can leave them unfilled to get nice arches. The build options are almost infinite, so each time your dungeon can be different.

The pieces in the box are already cut from the sprues, so all you have to do is to perform a little cleaning and glue 2-part walls. I used Revell plastic glue with needle. The plastic is hard and the glue does not melt it enough, so the bond is not extra strong. One wall felt from my table to the floor and split to 2 halves. So if you want really strong bond, use super glue.

After cleaning and assembly I washed all the parts with warm water with soap and primed it with grey Vallejo airbrush primer. After that I sprayed the walls with brown-red paint and floor with beige one. This way I got dungeon with stone floor and brick walls, which looks interesting. Later I applied wash of dark brown, but before that I painted some bricks and floor tiles in different color for diversified look. When the wash dried, I drybrushed the elements with lighter shades of base color. That’s it! I used really basic techniques and thanks to well sculpted surface I received quite nice effect. 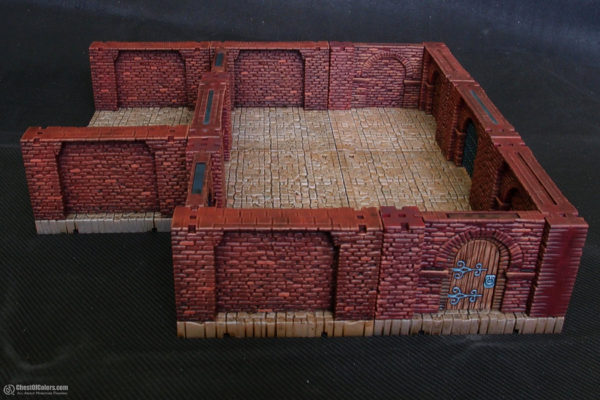 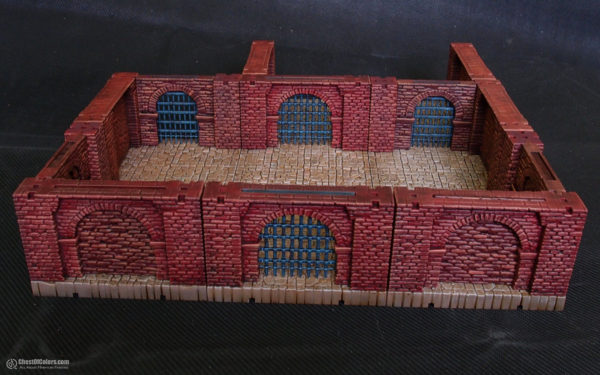 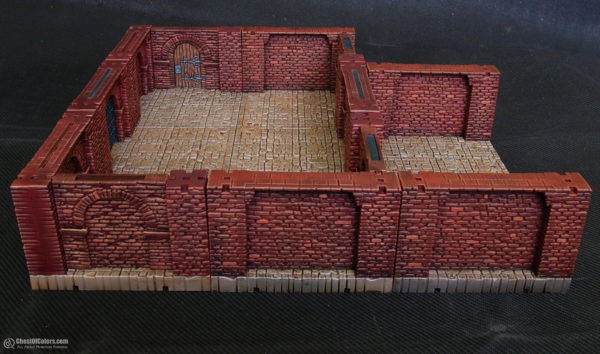 Here is my so-far small dungeon with figures and accessories – it really came alive and looks even better. 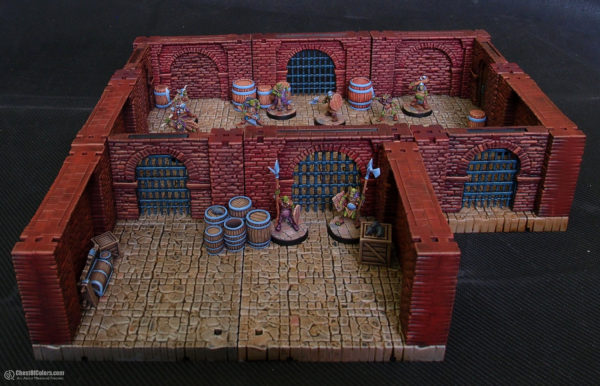 So far I painted just one Oblivion starter set. I have 4 more left, not counting KS frebies which in my case are more than 2 extra sets. I can build really complex dungeon. If only I had enough space to display it 🙂 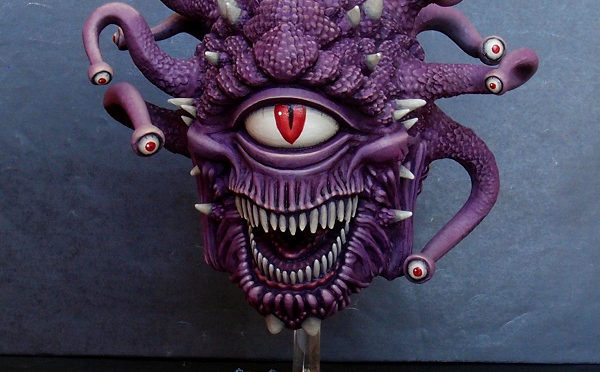 Some time ago I painted Eye Tyrant from Gale Force Nine. Here is another one – this time more purple in color, but no less deadly and dangerous then the prevously painted red one. 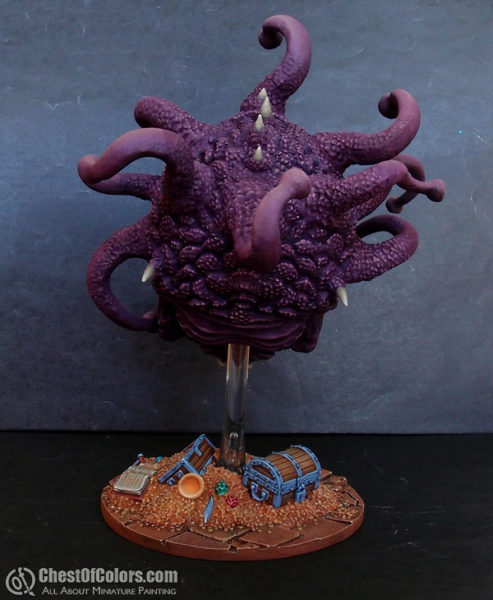 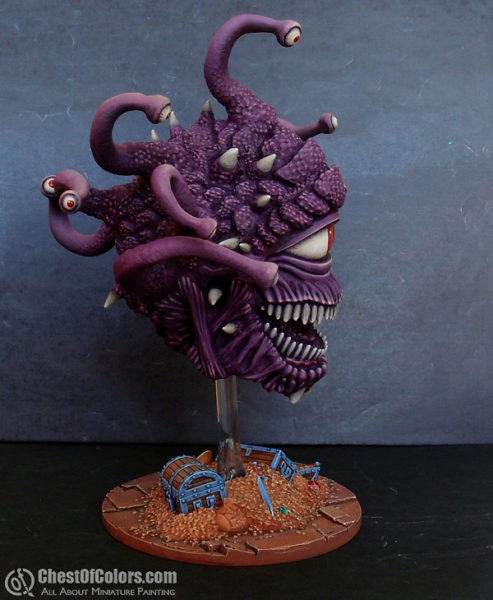 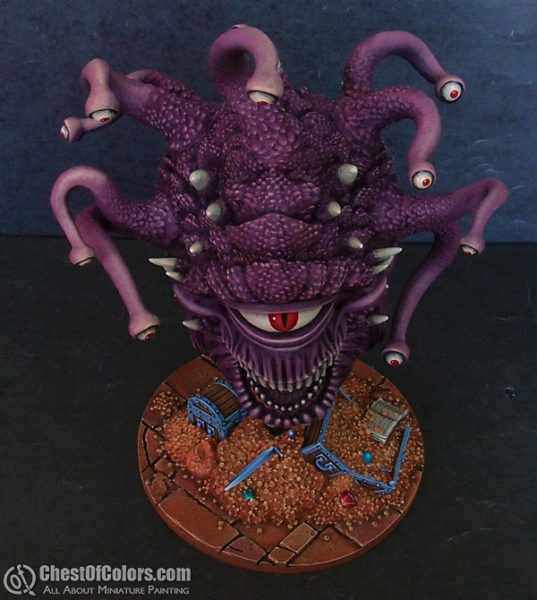