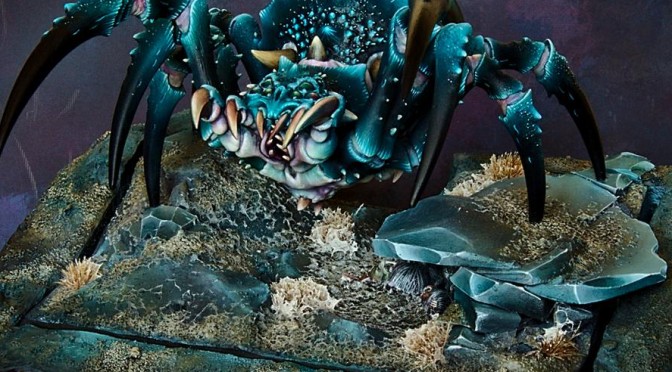 I finished painting this Arachnork spider in May 2015, but I didn’t  have the photos until now. Better late than never, here they are for you to see. 🙂

The text on the base says:

»Live on then, and yet hang, condemned one, but, lest you are careless in future, this same condition is declared, in punishment, against your descendants, to the last generation!« Departing after saying this, Athena sprinkled her with the juice of Hecate’s herb, and immediately at the touch of this dark poison, Arachne’s hair fell out. With it went her nose and ears, her head shrank to the smallest size, and her whole body became tiny. Her slender fingers stuck to her sides as legs, the rest is belly, from which she still spins a thread, and, as a spider, weaves her ancient web.

It comes from The Metamorphoses by Ovid. I think the connection is pretty obvious. 😉

Here’s what the official Games Workshop narration says about this monster:

In the darkest depths of the most sinister forests, even Giants and Cygors can fall prey to the colossal Arachnarok Spider. Towering over houses and settlements alike, this gargantuan creature can be goaded into battle by Forest Goblins who worship it as a living god. Bedecked with shanty towers, altars to the Spider-god or even crude catapults, the Arachnarok Spider will terrorise the Warhammer world.

I hope you like it, and I will soon post some more WIP photos of my Alahan models.