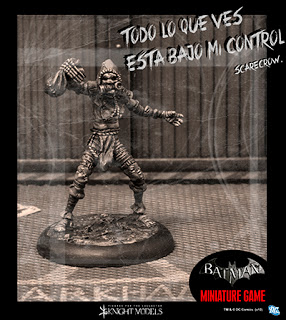 do you think rules are that important in this case?

Nameless wrote:do you think rules are that important in this case?

If those are minitures for a game, then you already know my answer

my opinion is that this time a game is for minis...
KM are not a gaming company, and I don't think they even intend to. Collectors will buy single minis of different Batman heroes anyway, KM just want to get some gamers to buy starter sets. Quick income, nothing more. I don't believe they will support the game over a long period of time. If I'm wrong about that - cool

Painting batman once is cool, but playing as batman is so much more cooler

KM could release those miniatures without a game and it would probably sell well, but with rules it can make so much more people buy it. It is also much easier to start playing a miniature game when you know the heroes and background.

sea.man wrote:KM could release those miniatures without a game and it would probably sell well, but with rules it can make so much more people buy it.

isn't that what I've just written?


If the rules are good, they can stop supporting it.

if they stop supporting it, the game will die. if the game dies, people will not play it.
mordheim and BB are not perfect examples, you can't compare KM to the biggest gaming company and games that are legendary to many people.
Also, take a look at minis used for mordheim and BB. you can use WFB minis for mordheim without any problems - isn't that a support? As for BB - how many companies are there now on the market? gaspez art, willy miniatures, impact miniatures, just to name few of them.

My prediction: batman game will be released, folks will buy starter sets, KM will be happy to sell more minis and will not support the game much, the game will not become legendary (it's hard without support and with so many other games around), the game will die, KM will loose the license sooner or later (not because of the game, because they will not want to pay for it).

I'll be happy to see I was wrong with that prediction

And if you look into that, Eden just released officially their rulebook after their Indiegogo campaign. Before that, they stayed for three or four years with a simple booklet with summed up rules that were placed inside the starters, so I don't think it's an issue here

@Nameless
I am sure Batman's fan base has to be much bigger then Mordheim or BB and games can live on thier own without producers, i.e.:
- Epic
- Mord-/Warheim
- Confrontation
I don't agree that it depends on the miniature range availabilty. If the game has great rules, I will become popular.
As for dead system I have no problem if it is dead als long it is good. To see my point, look at it as a normal board game.
My prediction is that KM will go into making more game systems for other heroes: X-men, Superman...