There have been several questions lately regarding the future of the our Star Wars line . After a lengthy evaluation, Knight Models has decided not to renew the Star Wars license with Lucasfilm. We’ve had a long and fantastic run, but with the economic downturn, we have made the tough decision to discontinue our Star Wars lines and extend the licenses we work with new products as the LOTR , DC , BATMAN films, MARVEL and more .

The license has officially ends ,while I know the news is disappointing, we wanted to make this announcement as soon as possible and thank you for being such great fans. It’s been a fantastic ride with the Star Wars community and working with Lucasfilm and you never know when we may circle back again!.


That's actually very sad. IMHO this is the best SW mini line to date. But knowing how IP wars rage around (as for example with Games Workshop) this isn't as surprising as it could be.
Do not underestimate the power of stupid people in large numbers...

Wow, that's a shame. I wish I'd had the chance to pick up more of their 30mm stuff, as it was really good.
Top

Dam, not had any money to buy these 30mm StarWars models

Looks like I'm really going to have to pull my finger out and model/sculpt my own, it's not as if I don't have enough reference material now is it

Getting back into the thick (or rather thin as in thinning my paints) of it, not picked up a brush in some time so this may hurt a bit until I get used to the feel of them again

Batman Miniature Game is a skirmish game based on the broad Batman universe. You can command one of the most famous criminal bands in Gotham City to expand your territory and control the underworld, or stop their evil plans with the Dark Knight and his allies.

The game includes the most important characters created by Bob Kane, like Batman himself, Robin, Nightwing, etc. aided by the Ghotam City Police trying to stop the gangs led by the most infamous criminals and psychopaths of the DC Comics universe, like The Joker, Penguin, Two-Face, the immortal Rash al Goul and many others.

Knight Models team has created incredible detailed miniatures to accurately portray these characters and their sidekicks, 30 mm scale ready to assemble and paint. This is a licensed and official DC Comics product.

Batman Miniature Game is an innovative and original game system, easy to learn and tactical deep, that features thrilling combats and frenzy action, where bands of 5 to 12 characters fight to achieve their objectives in games of 40 to 60 minutes duration.

Choose side and get ready for the ultimate battle to control the streets of Gotham City!.

The first thing is band creation, you will love this part because there will be a lot of possibilities.

Batman universe has a very rich and detailed background, with over 65 years of comic-books, tv shows, movies, etc.

The idea is that there will be bosse like the Joker, Penguin, Two-Face .... and they can fight each other as well. On the other hand many characters of the Batman Universe are not so important to form their own band, these are called "free agents" and will ally to one side or the other according to that point of the story and their background. Each boss can have sidekicks and lackeys, or be replaced by one of them, these sidekicks will modify the way you play with that band.
Each character will have a Reputation value (is the equivalent to what other games call "cost" or "points"). Also some characters will cost USD because they have some special rules or expensive equipment. Dollars will be used to buy additional equipment for your lackeys as well.

Turn will be divided in several phases, first Plan Preparation. The Motivation score will determine the number of actions each character can take each turn, in this phase you will distribute this tokens forming your plan. The plan is open so the opponent can see where you place your tokens, making a very tactical and deep game.

Then comes the activation phase of the miniature, eachn player take turns activating the habilities of the characters following the previous plan, p.e. Batman can use the Batclaw or throw a Batarang, Bane can use a Titan dosis, a Clown his Insane Laughter... as we release figures you will discover the potential of each character and their rules. Each character will be special and charismatic so the player can feel the resemblace to comics, video games and movies of this wonderful world.

After activation phase the turn is over and any effect or recovery of the characters is resolved (yes!, characters can recover from KO or heal injuries).

There will be scenarios (we want it to be an spectacular game!), but I prefer to tell no more, we want you to discover many surprises when the game is available.

Looking good. Lets hope they correct the spellings before going to print. 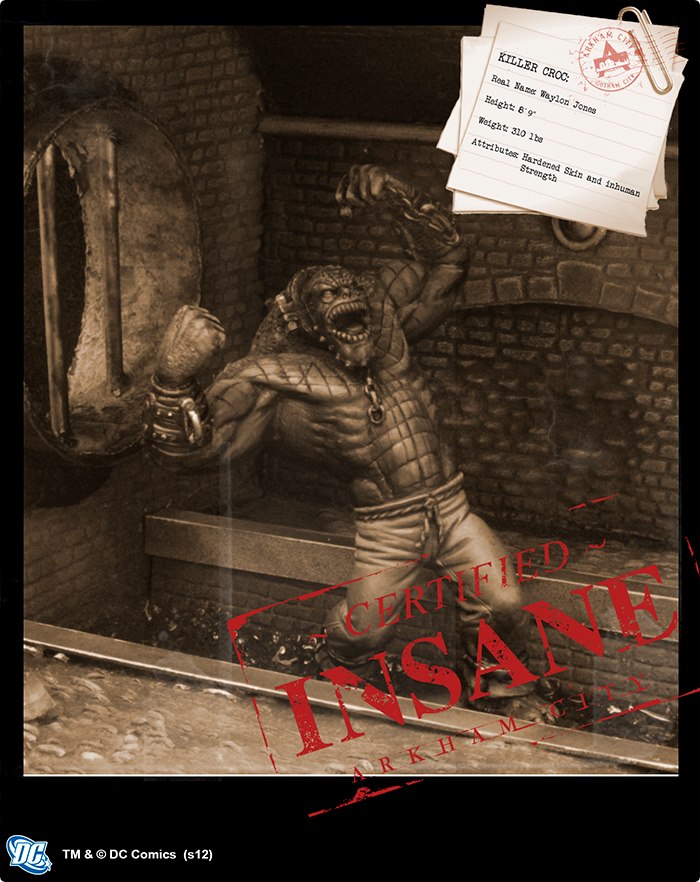