A group of gamers here in Dubai invited me to join their club and last night was the first time I went and luckily they had a copy of Dreadfleet to test out for their store. This allowed me to try the game out and report my impressions in this Dreadfleet review. 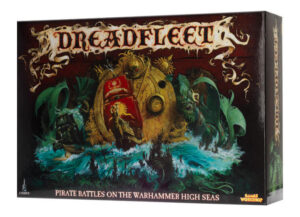 Anyway, my initial impression is that the sets of models were superbly detailed with very few mold lines, etc. and putting them together was really quite easy. The GW plastic kits in Dreadfleet really are a treat to work with and the quality is great. 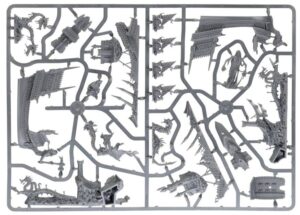 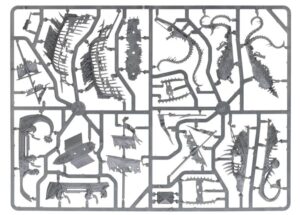 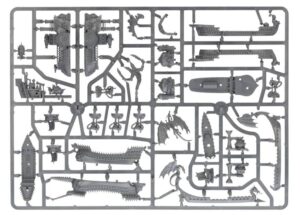 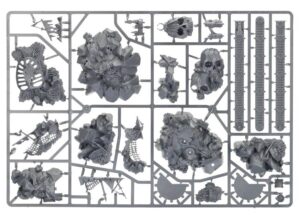 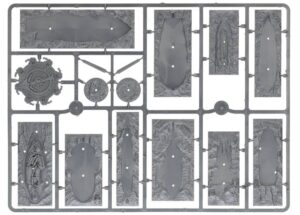 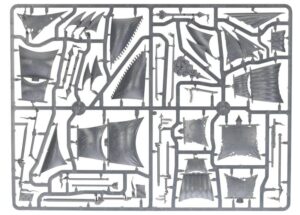 The Dreadfleet board and all the game pieces are also of a very very good quality. The board is a fine cloth which feels nice to the touch, very smooth and light. I’m not completely sure about the non-crease abilities of it but still we will see. 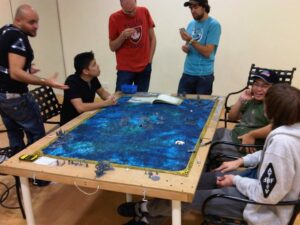 As for the game itself it took us 1 turn of play and about an hour and a half to get to grips with the rules of Dreadfleet and with 9 of us there (8 players and 1 referee), it was really fun as each of us had a warship to control and use. The mechanics of the game are well thought out (although I’ve never played Man-O-War or the Spartan Games, so I don’t know how they compare). 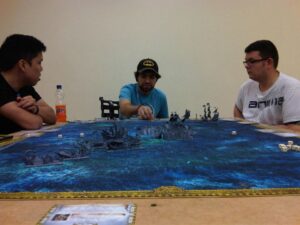 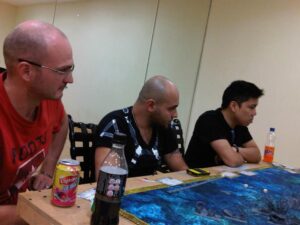 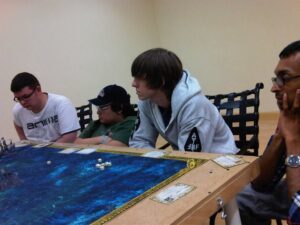 The game starts with different scenarios, initiative and the teams take turns activating a ship one at a time which is similar to other games systems like warzone so the tactics and dynamics are much more exciting and slightly more tactical. Especially when you factor in the wind and broadside firing, etc. The only thing I had a quibble with was that you could not ram another ship. You can board them, but not ram.

As combat went, you can either: 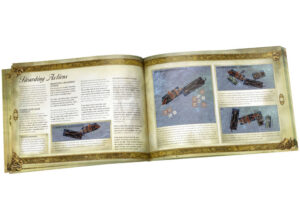 The damage was worked out using damage cards which was varied with stuff like damaged hull, speed, crew, broadsides etc. It actually made it a lot more interesting and the survivability of ships was increased some what.

Dreadfleet has the nice option of giving ships command orders at the beginning of the turns was also a nice touch (after you pass a command check of course) and added much needed boons now and then and made it more exciting as sometimes you could fail that check and your well laid plans went up in smoke.

Generally speaking as it was our first game of Dreadfleet I am sure we made lots of mistakes etc. but as a game goes I think it’s a lot of fun and can be very dynamic and tactical. I think as far as quality of game goes it’s really good, not much I can fault them on there. The rules set are fairly good and cover everything pretty well although there are a couple confusing elements to the rules but we did figure them out towards the end. I think GW have made a game which can be played by kids or by older generations and as a standalone game I think Dreadfleet is actually worth the money, but only just.

If you liked it, share it with your friends...

One thought on “Dreadfleet review and gameplay impressions”

This site uses Akismet to reduce spam. Learn how your comment data is processed.

"There was once a fertile land of golden grass and prideful lions. Uncounted centuries ago, a parasite took root and over time a corrupted city grew to engulf the plains. The Golden Knight, a mysterious guardian of these lands, waged a losing war against the corruption. As futile years passed, the knight’s appearance grew twisted and haggard as the land itself. It’s glorious mane fell out, replaced by angry wailing smoke billowing in its place and the Gold Smoke Knight was born."
"There was once an entity that knew everything, but never spoke. For every secret that escaped, it became weaker and its enemies stronger."
Magmadroths are powerful creatures, with a fiery breath, scorching blood and whipping tails. Only a Fyreslayer can withstand the heat emitted by the Magmadroths.
This time in the spotlight we have Robot Tripods from @onepagerules.
Back to our @onepagerules projects!
Ghazghkull Thraka - one of the most recognizable ork models, with the paintjob that won our teammate @luke_at_minis his first trophy in the Masters class at #kontrast2022.
You liked our version of Mummified Undead army from @onepagerules, so let's give @luke_at_minis some time to prepare another batch, and in the meantime you can see the next addition to the Robot Legions army we're painting.
This batch of Mummified Undead is done, so now you can see the family photo of the group. It includes: Warriors, Skeleton Beast Riders, Hunting Beasts, Mummy King on Royal Snake, and Mummy Stone Shaper.
We're back from Kontrast 2022, where we had an absolute blast! Fantastic time with our friends and hundreds of wonderfully painted miniatures.