Post your "Work In Progress" photos here.
Forum rules
Post pictures and discussions regarding works in progress here, please. If you have photos of these works when they're completed, feel free to post them to the right section and feel free to add the link in your post about the work in progress.
Post Reply
33 posts

It's been a while since I've tried doing a WIP log for a mini. Usually I only take pictures at the end, and maybe once or twice in the middle if I'm looking for guidance.

I'm going to try to make a concerted effort to take pictures of this one much more frequently during the process. This one is a Rackham figure, which is one of the Gardes de Kaïber.

Here it is prepped and primed. I use Tamiya Fine Surface Primer (white) because it gives a nice smooth surface, and has a somewhat pleasant smell. :-p 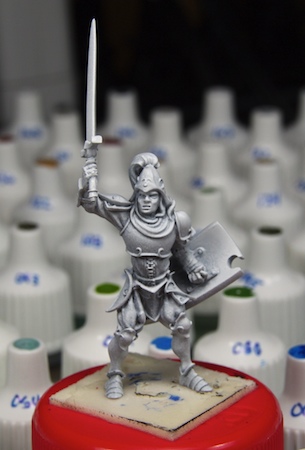 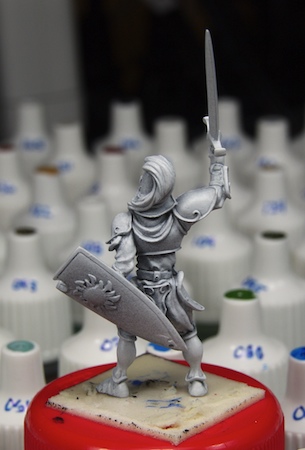 On this guy, I'm going to be doing a few things differently from my normal process (in addition to the multiple pictures bit I mentioned earlier). Usually I focus on one area at a time, going from basecoat to fully shaded and highlighted before moving on to another part of the mini. This time, I decided to basecoat the entire model to give a better idea of the color scheme right from the start. I'm also going to use true metallics on this, rather than the NMM that I've been doing for the past several years.

For the cloth, the basecoat is VMC 123 (Dark Sand).
The main armour parts are basecoated with VMC 168 (Black Grey).
The golden armour parts are VMC 150 (German Cam. Black Brown)
The plume on the helmet is VMC 33 (Red).
The skin is VMC 36 (Beige Red).
The leathers and back of the shield are also VMC 150 (German Cam. Black Brown).

Some spots are rather sloppy at this point, but they'll be cleaned up eventually. 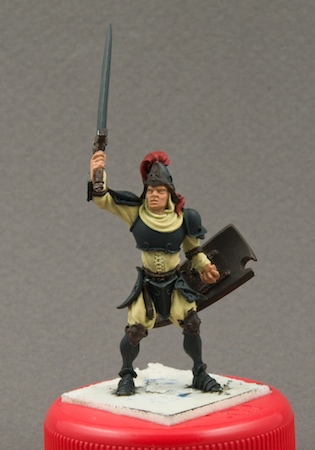 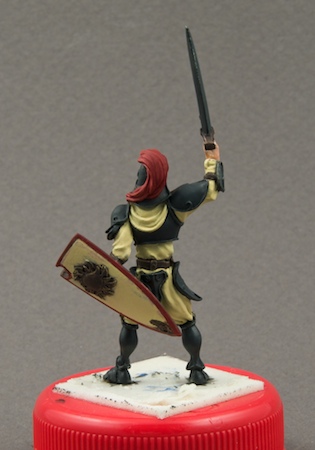 To be continued.
Top

I got quite a bit done on the armour this afternoon. Started off with VGC 54 (Gunmetal Metal), but after a single light coat, I realized this was going to be too dark. So I then mixed in some VMC 171 (Silver) until each was about equal, and then proceeded with a couple more thin coats.

After this I started shading with very thin washes of VMC 168 (black). The first picture in the sequence is after about 3 rounds of washes, and the second is after about 7 rounds of washes. Since the other main colours on this figure are in the yellow and red families, I decided to add a blue tint to the metal. This was done with some thin glazes of VMC 157 (Dark Bluegrey). The results of this are shown in the third picture in the sequence.

After this, I went back over the highlight areas with first the Gunmetal/Silver mix, and then with pure Silver. At this stage, I also touched on the filigree.

So now the silver parts of the metal are close to being finished. I'll likely touch them up near the end. You might notice that the sword hasn't been painted (apart from the base coat). This is because I know that I'll be rubbing the sword quite a bit while painting the rest of the model, and a fair amount will wear off. So I'll just save that for the end.
Top

I really like very clean keep the photos coming
Top

Thanks for the step-by-step. I know it's additional burden to keep photographing and posting it as you go, so it's even more appreciated!
-- Mahoń

For the cloth, I started shading with a mix of VMC 123 (Dark Sand) and VMC 46 (Violet Blue). Next, I mixed in a touch of VMC 69 (Turquoise) and VMC 169 (Black) to further darken the color. Then I cleaned up the midtones with Dark Sand, and started highlighting with a VMC 8 (Beige) and then VMC 7 (Pale Sand). Finally, the top highlight was VMC 4 (Offwhite).

Here are the progression images (front and back):

Finally with the last hightlight of VMC 4:

With the cloth pretty much done, I started in on the skintones. The pictures will concentrate on the face, since that's where the effect is most pronounced. The first pass at shading was done with VMC 135 (Beige Brown). After that, a mix of the beige brown and VMC 43 (Violet red) to give a more cool tone to the shadows. Then it was cleaned up with the Beige Red (the basecoat) again, and the first highlight was applied with VMC 17 (Basic Skintone) that was slightly tinted with Dark Bluegrey. The second hightlight was done with VMC 6 (Light Flesh).

Next, I filled in the eyesockets and mouth with Black, and then painted the eyes and teeth with Offwhite.

Next up are the gold parts of the armour. Like the other metals, I started with a pure metallic color and then washed with a non-metallic color to provide the shading, and then highlighted again with metallics.

In this case, I used VMC 173 (Old Gold). The shading was done with VMC 148 (Burnt Umber) -- several very thin washes to get the desired effect. Then the metallics were brought back with Old Gold and finally with VMC 172 (Gold).

You may notice that the skintones in the face are a touch warmer now than in the last photo. I went back and glazed it with VMC 129 (Light Brown) to reduce the blue tones that I had before.

On to the plume on the helmet. First I shaded with several controlled washes of a mix of VMC 35 (Black Red) and Black. Next I cleaned this up with the basecoat of Red, then highlighted with VMC 31 (Flat Red) and finally VMC 29 (also called Red, but a different red than #33)

For the next part, I did quite a bit of wet blending, so there aren't any intermediary images. This is the inside part of the shield. Basically I took 4 colors and blended them together on the figure itself. Unfortunately, it's really hard to see any gradation here. The four colors were VMC 150 (German Cam. Black Brown), VMC 139 (Mahogany Brown), VMC 145 (German Camo), and VMC 128 (German Cam. Orange Ochre).

For the leathers, I started with another layer of the basecoat, VMC 150. Then I highlighted with a mix of VMC 139 and VMC 128. Next, another highlight of VMC 128, and finally a mix of VMC 128 and VMC 4 (Offwhite). Since there was hardly any noticeable difference between each layer, I just have the final image here.

Next I was ready to put this on the base. Again, I unfortunately have no pictures of the creation process for the base itself. It's a 1 inch cube block of wood with a bit of milliput on top with sculpted flagstones. The stones themselves were painted with just about every color that has been used on the miniature thusfar (except for the metallics), and was done with quite a bit of wet blending and glazing.

Now that the figure was on the base, I was ready to start on the shield. The main field of the shield was painted in the same colors as the cloth, but was wet blended. The red trim was the same color progression as the plume.

Next, the symbols on the shield were painted in the same way as the gold parts of the armour.

Finally, I painted the gold and silver parts of the sword (which isn't very noticeable from this angle)

At this point, I could probably call this figure done once I've touched up a few things. It seems like it could use something else, but I'm not sure where I'd go from here. Any thoughts?
Top

great stuff!
I love to watch progress of such a cool paintjobs!!!

is the face finished ?
because it missed of nuances to give him lives, scally green + dark blue added in your skintone could be great
more bright colors one the cheeks to point out the face form the rest
http://www.illusionrip.pl/
Top
Post Reply
33 posts