It never ceases to amaze me how different things look in person! Beautiful work pae. He's got so much character in his face. Looks so aggressive. I love your smooth blends, and you're right to be proud of those metallics. Did you bring them up even higher than last time I saw them? Very nice!

So what's next for you?

Nope, I didn't touch the metallics since Saturday. It's just that the lighting in my photo tent thing is much brighter than the lighting at Attactix. You still hate the teeth though, right? :-p

Actually, that's not true. I knocked down some of the metallics on the sword. Part of it didn't blend very well.

What's next? Well I suppose I could finish that Freebooter chick you saw. I considered throwing it away, but there's not too much on it that I hate, so I can probably fix it. I do have another one that's probably going to be trashed since the face is so bad I can't fix it. I have a few others in assembly stage that will probably get primer once I finish sculpting the bases. They are 54s, even. Scary thought.

Nice to have you here, Jen. I'm sure these peeps would love to see what you've done.

Hahaha! And I was just going to post a praise how good this one is looking... but if it looks different in person

Hahaha! And I was just going to post a praise how good this one is looking... but if it looks different in person

Thanks Mahon. Maybe Jen's monitor is calibrated quite a bit differently from mine. The pics look pretty close to the real thing (to me) on both my iMac and MacBookPro.
Top

No no no! It's much better in person!

Someday I hope to get a Mac, but for now it's PC city.

Yeah, it looks so much nicer in person than online. You have a lot of depth and subtle nuances of color that just don't read on my monitor. You're just overly critical of your own stuff and hence fail to see it for what it really is.

I have about 4 figures in progress right now, so it seems like forever since I finished anything. I started this one back in late February, then didn't touch it for 2 weeks. When I picked it up again, I hated how it all looked, so I repainted most of what I had done before. It's been through a few iterations, and thanks to some feedback from a few people, it's in a place where I'm going to call it finished. 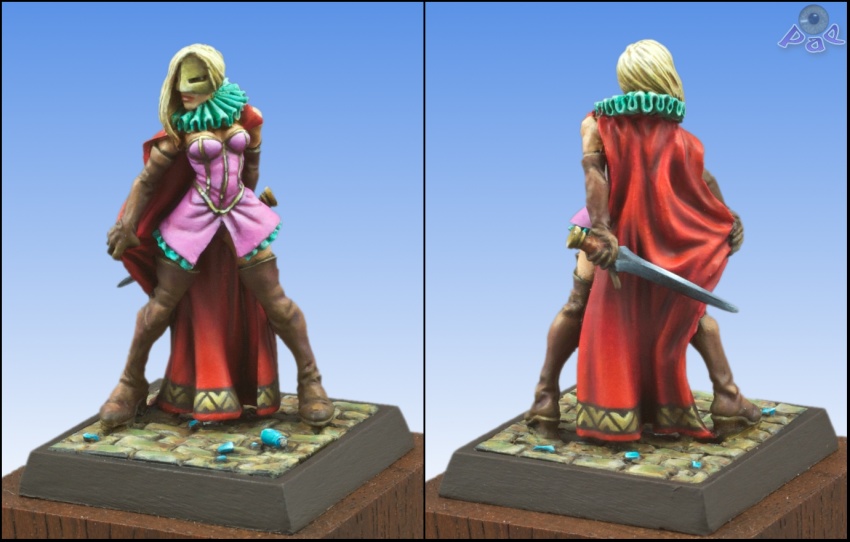 I like the smooth blending of the whole mini. However, if it is a NMM mask on her face, its color is too similar to her hair imo. The back of her left shoulder is a bit rough as a woman.

Beside, it is just a color choice, nothing right or wrong, I will not use the same color as the collar and the skirt and then the broken stones or bottles on the ground. Kind of too consicidence (wrong spelling?)

Compare to some other minis you posted here, eg the first mini you posted and the last one, the guy with RMM, armoured and holding a sword, I like those more.

Nice to meet you btw.
Top

Gorgeous red! I gotta get that recipe from you. I just love how you use saturated colors... They make your stuff so lively!

I like the way you carried the cool minty tones from the collar and the skirt ruffle onto the base. Helps the harmony and visual flow for me.

A couple things: Her left hand seems to merge with the pommel of the sword a little. Stronger darklining there or a more contrasting color would be nice. You could change the pommel to a cream color without throwing things off too bad. And for the most part I think I agree with Hosea about the gold blending in with her hair, but it looks better than the silver did, and it ties in with the cloak border and dress trim. Maybe it would have solved that issue if you had pushed the shadows on the mask a little further?

That Dragyri isn't going anywhere. Except maybe the trash. Haven't touched it in a while. I've been working on another figure that seems to be destined for the trash.
Top

You gotta suck it up and push through Man!

Never give up, Never surrender!